I woke up to my dead iPhone — my phone just stopped working just like that. After having breakfast with Frances and our host, Mrs. Cindy Weir, I set off and went to Fido to get a spare cellphone — the cheapest they could offer was simply beyond my budget.

Frances called me and tells me her bus has to take a different route, which meant she wasn’t going to the place we agreed to meet; instead, she was headed to Wawa, and with the detour, it will be a 550 km journey. I wondered how I was going to do that — perhaps hitchhike?

I then left Sault Ste. Marie from the north, and went to take highway 129, which is the highway doing the detour to Wawa. At the intersection between highway 17 and the road, I tried for an hour to find someone to could get me to highway 129. However, all the traffic was local. This couple told me I would never find someone going along the detour unless I went back to Sault Ste Marie and backtracked 50 kms. They told me I should keep going on highway 17 as I should be able to pass without a problem with my bike.

I then decided on a second plan. I would hitchhike all the way to Agawa and then use my bike from there to Wawa. The only problem was that the only vehicles going were trucks and they were not allowed to take hitchhikers. Therefore, I ended up just continuing to cycle my way, but eventually realized that I was never going to make it to Wawa that evening. I then sent a text to Frances — little did I know that that was the last moment I would be able to contact her. There was no signal, no internet, no way to communicate to anyone within a 10-foot radius after that.

For a part of the ride I had a tail wind, which allowed me to cycle far. On my way, a lady told me that if I don’t make it to Agawa, I should stop in Pancake Bay, because there won’t be anything between both places. I made it to Pancake Bay around 6 pm and went to a grocery store.  There, the storekeeper assured me that I would find a grocery store and night staff at the Agawa Bay Campground, so I decided to continue. 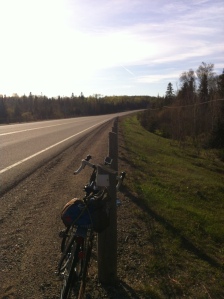 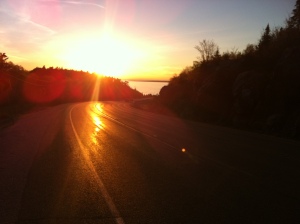 After having cycled through a massive hill; the most massive I’ve gone through so far

I kept on going. I passed two massive hills, and eventually made it to Agawa Bay Campground just before sunset.  just in time to realize that there was no staff, no grocery stores and nowhere to sleep for the night. Using the public phones next to the closed information office, I called my girlfriend and my parents, but none of the phones were working. I went back three times to and from the camp area to the site of the telephones to try all kinds of things to make it work, to no success.

There were, at least, two campers.

One of them, Gordon, saved my life by giving me macaroni for dinner, and lent me his sleeping bag. I slept on the beach. It was freezing cold — thankfully my sleeping bag warmed me well enough. With the beautiful sky above me, I managed to sleep.

It was a long and hard day for me, but I can only imagine how much longer and harder it was for Frances and my parents, who must be so sick worried about my condition by now. As I lay in my sleeping bag, I realized the importance of communication, how that little “I’m ok” can simply allow someone to think clearly. How the simplest of words can mean so much. I didn’t want my girlfriend nor my family to get worried about me and have the most obscure of thoughts simply because I am unreachable, and I had absolutely no way of contacting them — none at all. In many ways, I guess — in all forms of life — communication and that exchange of words, no matter how small, is the basis of relationships, and the lack of it can cause many forms of misunderstandings. As I closed my eyes, I promised myself: tomorrow, first thing — I will go to the camp office, pick up that phone, and tell my girlfriend I am safe and sound, that I am alive and kicking, that I am ready to continue this challenge.