(Today’s entry was written from the perspective of Frances, who has accompanied Daniel on his trip starting from Montreal.)

Last night, just as I was about to go to bed, I checked to see if Daniel’s phone had already finished charging, so I could set up the alarm clock. I found it eerily bizarre that it wasn’t even charging, as it had been plugged for over an hour already. Whenever I plugged the charger, however, the cellphone would respond. Thinking that the battery was simply too drained, I went off to bed.

The next day, Daniel’s cellphone still wasn’t working. The closest place where his phone could be repaired would be Winnipeg, and he didn’t think it would be reasonable to get a temporary phone for $150 (the cheapest we could get). We both had no choice, then, but for him to take mine, as it had a GPS.

After having breakfast with our lovely sponsor, Mrs. Cindy Weir, Daniel had his interview with Kiss 100.5 and Country 104.3 of Sault Ste. Marie (listen to it here). Daniel then set off for the day. 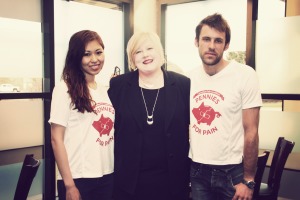 With our sponsor in Sault Ste. Marie, Mrs. Cindy Weir

I, on the other hand, headed for the bus station. The lady manning the station told me that highway 17, the route that Daniel and my bus were going to take, was closed for repairs, and won’t be open until 36 hours later. She said that no cars nor bicycles would be allowed to go through the highway, and that the bus will have to go down through Thessalon, then up through highway 101, then 129. Dan and I were supposed to meet at Agawa, but because of the repairs, the bus will not be able to get there; instead, the closest it could get to Agawa would be Wawa, which was 87.5 kilometers further.

Funnily enough, I’ve had a bad feeling about going to Agawa since the beginning. Now I know why.

Worried, I tried calling Daniel using the pay phone. I scurried around to see if I could have my bills exchanged, to no luck, until I saw a coin-changing machine. A one-minute phone call cost $6, but I was still able to explain to Daniel the situation. We both agreed that I should go to Wawa, and that he’ll find a way to get there.

And here is where the adventure starts.

1:05 pm. Approximately 35 minutes late, the bus finally left. Daniel’s laptop, which I had, was low on battery, and the bus, which normally had outlets for plugs and wifi internet connection, didn’t have either of them. I wanted to call Daniel again to see how he is using Skype — thankfully I had my wireless 3G internet, plugged it in the laptop, and saw that Daniel sent me messages on Facebook:

Daniel, 12:44 p.m.
When you make it to wawa try to see if you can hitch hike back to Agawa park
Call me when you can
Love you

Frances, 1:05 p.m.
Hi baby
love you
I’m not sure if you can cycle along the highway…

Frances, 1:10 p.m.
are you there?
the highway 17 is closed apparently
the greyhound people told me that no one can pass through highway 17 today, not even cyclists
so you won’t be able to get to agawa either

Daniel, 1:21 p.m.
Ask someone to lend you his cell
Ask the driver where it’s closed
Cause wawa is a massive detour

Everyone around me was sleeping, except for the lady beside me. She wasn’t able to lend me her phone, because she was coming from Europe and her phone was on roaming mode. So I tried calling with Skype. My account wouldn’t work, so I tried using Daniel’s account.

Frances, 1:26 p.m.
baby ill call you on skype
where are you right now?

I tried calling and calling, but Skype simply wouldn’t work with the Internet connection that I had. I restarted the computer, tried everything. Everyone around me was still sleeping and couldn’t borrow a mobile phone.

Approximately 2 p.m. A few minutes later, around 2 p.m., my Internet connection stopped working. I couldn’t connect at all, and there was not even the faintest of signal. I’m guessing that this was also the same point we had left highway 17.

2:15 p.m. to approximatey 6:20 p.m. I was unable to connect since then. To say the least, I was so worried that I got a migraine, and my stomach churned very oddly throughout the bus ride. I closed my eyes to tell myself everything’s going to be alright (as Daniel would love to say). I woke up from time to time to check my Internet connection, and to borrow my neighbors’ cellphones, but there really was zero signal. The laptop’s battery was also losing power quickly. If I had to say which area of the world I found to be the most remote, it would have to be this. We passed by rows and rows of towering pine trees, lakes here and there, all the while treading through rough gravel roads and patches of bumpy, rocky pathways. Everything seemed as if it was untouched by the human hand — it all seemed too remote and eons away from civilization.

6:21 p.m. I breathed a huge sigh of relief when I saw the sign welcoming us to Wawa. The bus driver kindly dropped me off to the town center. I asked the convenience store if they could call a cab for me, and it arrived a few minutes later. I told the driver, Kookie, of the predicament I was in, and she lent me her phone so I could text Daniel. She also offered to drive Daniel from the area of the construction to Wawa. I thanked her and kept her business card.

6:40 p.m. I checked into the motel, and opened the laptop right away. I called Daniel, and while it rang twice, he didn’t pick it up. I sent him two text messages on Skype, no response. He did send me a message earlier, however:

6:47 p.m. Facebook told me that Daniel was online, so I sent him a message:

Frances, 6:47 p.m.
Baby?
I’m so sorry
there was no signal at all during the trip
and I borrowed cellphones, no signal either
I just arrived in Wawa
where are you?

6:50 p.m. Called him again. I could only hear my own voice mail message.

7:15 p.m. Called him again. I could only hear my own voice mail message. I called him throughout the night, in intervals of fifteen minutes.

Frances, 7:30 p.m.
there is a lady here she said she could pick you up where the construction is

8:29 p.m. I sent him a message to release the tension, and with the tiny spark of hope that he would be able to see my message.

8:30 p.m. I did my best to calm myself down: opened the television, responded to emails as quickly as I can, thinking that time will pass by with the speed with which I was doing my things.

9:23 p.m. Still no news. I tried imagining how he could be spending the night — without anything but his wallet, small bag, and thin jacket. Has he eaten yet? Are his lights working? Where is he? Could he have hitchhiked?

10:04 p.m. I was so dazed to the point that I found myself watching one of those home TV shopping channels.

10:53 p.m. I told myself not to let fear and meaningless thoughts take over. Everything is alright. He is most likely safe and sound, probably in the car with someone who offered to bring him to Wawa. Going through the detour would take him approximately five hours to get to Wawa. This meant that if the last time he had a signal was around 6:30 p.m, then he should be at Wawa before midnight.

11:01 p.m. My room was right beside the motel’s entrance, and the window overlooked the parking lot in front. Throughout the night, every time I would hear someone  open the door, I would always have this vision of Daniel in his white “Pennies for Pain” shirt, black cycling shorts, and red helmet entering the door with an exasperated yet joyful light on his face.

11:48 p.m. My internal alarm woudn’t turn off, so I decided to phone Daniel’s mother to let her know of the situation. She calmly told me that Daniel should be alright, that he’s experienced far worse situations than this, and that he’s probably in a remote town where people are taking care of him. Listening to her assure me already took away half of my worries.

12:16 a.m. My panic mode was already down to 50%. It still didn’t keep me from opening the door to see if the new guest coming in would be him.

1:46 a.m. Dressed in his sleepwear, the motel owner, who knows every detail of what happened, eventually told me that I should go to bed. “Everything is going to be alright,” he said in the same way Daniel would, as if he was speaking through the owner.

1:58 a.m. I sat on the bed, and I was too fatigued physically, mentally, and emotionally to stay awake. As I slept in a seated position, however, one thought kept on lingering in my head: Come here, sweetheart, come here soon.

Tell us what you think Cancel reply