Did you know that Winnie the Pooh is Canadian?

The bear that was the basis for this famous character was from the town we stayed in last night and this morning: White River, ON. Read the rest of his story here. 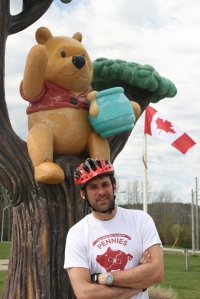 I now know what the common thing is between me and Winnie (it’s in the photo!)

White River is a very tiny town, but with a beautiful river running along it. The river becomes mysteriously white, especially towards sunset — we’re guessing this is where the name of the town comes from. 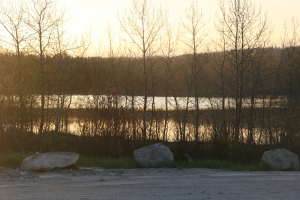 After checking out the Winnie the Pooh statue in the town, I set off for our next destination, Terrace Bay. It was very flat for the first 80 kilometers, although the wind was against me. It then started getting hilly towards Marathon.

I stopped at Marathon to get something to eat. I have been told that the ride from Marathon would have really difficult hills, and they could not be more right: once I left Marathon, the hills became pretty steep, and the curves required a special kind of physical maneuvering to be able to get through. There was also construction that slowed me down.

Somewhere along the way, there were two cars that warned me about a bear roaming the side of the road. “Big black bear, careful!” One man said. I then spent five minutes looking for my pepper spray, just in case, and did not see anything in the end — all I saw was a tiny cub, perhaps looking for its mother.

It was a very scenic ride despite the hills and the wind. I met a guy along the way who told me that “British Columbia is going to blow your mind.” If Ontario is already this beautiful, I wonder how much more scenic BC could be?

I finally arrived at Terrace Bay, where my girlfriend was waiting for me at the gas station. She had surprised me with a huge dish of Chinese food. I have been craving rice for the past few days, as all we had eaten was bread, though lots of it.

There was no place to stay for the night, and we were right in front of a motel, Drifters Motel. The owner, Mr. Frank Tricholo, very kindly gave us a 60% discount on the room — we ended up paying $40, instead of $100. He didn’t even let us pay taxes! He gave us the nicest room they had, a lavish, beautifully-decorated suite that resembled a Swiss chalet. How much more grateful can I be, with so much kindness around us?

Tell us what you think Cancel reply